It’s report card time again.   We’ve recently received The Media Audit Alternative Newspaper National Report for the previous year and have reviewed the results which on the surface don’t indicate too much change from the previous annual report.

The research gathered from 89 U.S. markets from a 15-month period (January 2010 – March 2011) includes results for 132 different publications.  The report includes some non-weekly products, but the majority are published weekly and are members of A.A.N.   According to this new report, a total of 14 Million last edition readers are reached and nearly 27 Million 4-issue cume readers are reached by alt weeklies. 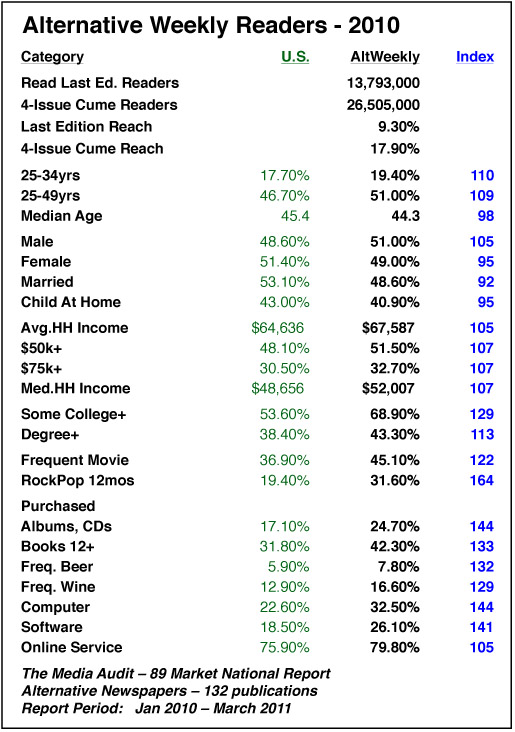 As we’ve noted every year, the age of the Alt Weekly reader has increased again but not significantly (43.4 to 44.3).  The media age remains  slightly below the national average.

Stay tuned for more updates from the AWN office from this newly released report.

One of our digital initiatives launched in 2009 was a network-wide measurement partnership with web analytics provider Quantcast. By 2010, AWN listed approximately 98 properties on Quantcast.com with over 4 Million users (people) gathered under the collective banner of alternative newspaper websites. We’re promoting that collective effort again now as Quantcast has made further improvements in their tagging process.

The goal was to provide a more consistent, current measurement of alt weekly sites (individually or collectively) that we can use to market the industry and attract national digital brand advertising. It remains a fairly simple proposition, getting alt weekly web sites quantified on Quantcast doesn’t cost anything and it will not impede any current web tracking practices employed by site publishers.

Earlier this Spring, Quantcast improved their async tag process, making it even easier for site publishers to implement. The new asynchronous tag loads 100% in the background, so it has zero impact on site page loads.

If you are already measured by Quantcast or another analytics firm, the addition of our tag will not effect any current site performance. We’re recommending all AWN media partners participate in this roll-up. There are currently 91 sites rolled up under the AWN network, (thank you to those who have kept the tags alive since the launch) we recommend replacing older AWN Quantcast tags with newer ones.

We expect to grow the measurement group substantially and to be able to include highly-ranked Quantcast numbers in our new digital sales initiatives this Summer.

Just five pages into the massive (132-page) report released by The Columbia School of Journalism Tuesday, you can quickly see there isn’t a cheerful ending to the story. If you haven’t noticed how chaotic and confusing the media business and journalism itself has become over the past few years, you must not have clicked on a web browser in a while. The Tow Center for Journalism report (available as a PDF document here) titled The Story So Far: What We Know About the Business of Digital Journalism focuses primarily on the economics of news organizations—large and small in the digital world. What’s occurring in the digital world can no longer simply be deemed an economic distraction for most media companies, it’s about dealing with the fundamental changes to the media business.

In the report (the second released by this group), the authors pose a number of questions, many of which will not come as a surprise, but mostly you’ll come away with the feeling that no one really has discovered real solutions, sticky enough to lay a foundation for a solid future. They offer eight recommendations (listed in the release story posted here) which include some obvious points and some hard lessons that have yet to be learned by the Media. By reading this report, you’ll begin to understand some of the fundamental differences between traditional or “legacy” media models and some of the new alternative models which have already redefined terms like aggregation and hyperlocal.

For some of us in the business who have had our eyes on the prize and feet on the ground for some time, I say, it’s about time someone rounded up all of these bits and pieces and created a meaningful discussion that doesn’t carry favor toward any single idea or industry. The discussion here should appeal to a wide range of readers; media professionals, and anyone who wonders why their newspaper has shrunken in size and content, or has difficulty discerning between paid advertising and content on the flat screen in front of them.

The authors clearly support journalism in a general sense but have difficulty defining “digital journalism” and the elusive nature of the new world order that is driven by technological advances in communication that can easily outstrip mature media models. Thanks to these same advances, we’re now living in a experimental world.  Our favorite media outlets will need to experiment in order to survive.

As you might have guessed, you can already read a number of observations of this new report throughout the web, some are reviews, some are news reports, and others are opinions. Besides, the source site mentioned earlier in this post, one blog post Future of Media: Lots of Questions, But No Easy Answers from Mathew Ingram on Gigaom.com may be worth another click.