As we contemplate the recent assertion ‘print is not dead’ from a report published by www.whoneedsnewspapers.org, we’d like to share some of the current marketing efforts from members of our sales cooperative.    We’re not only checking the pulse of PRINT advertising from national brands and agencies but we’re trying to pump some blood back into the veins before that patient expires.  After all, it’s the final quarter of the year, a time when we often see additional non-local ad dollars surface.

Earlier this month, AWN president Brian Hieggelke (publisher, Newcity and veteran seller in our network) sent a well-crafted e-blast to a good-sized list of advertising contacts (see excerpts from his letter below).   The clever message which took a fresh approach to our greatest advertising success story in our 17-year history was sent to past, current, and prospective advertisers in an effort to spark AWN marketing efforts.   Apparently it’s generated some response already- within a week, he received positive feedback and a several nibbles from advertisers an agencies who may see AWN as a possible marketing channel for their plans.   Here’s some of that letter:

…I wanted to drop you a quick note with an update on our organization, which is rocking its second decade. We’re currently 150+ publications strong, coast to coast in markets from Maine to Hawaii and from Washington to Florida, with a weekly circulation of five million in print and 15 million unique visitors online each month. 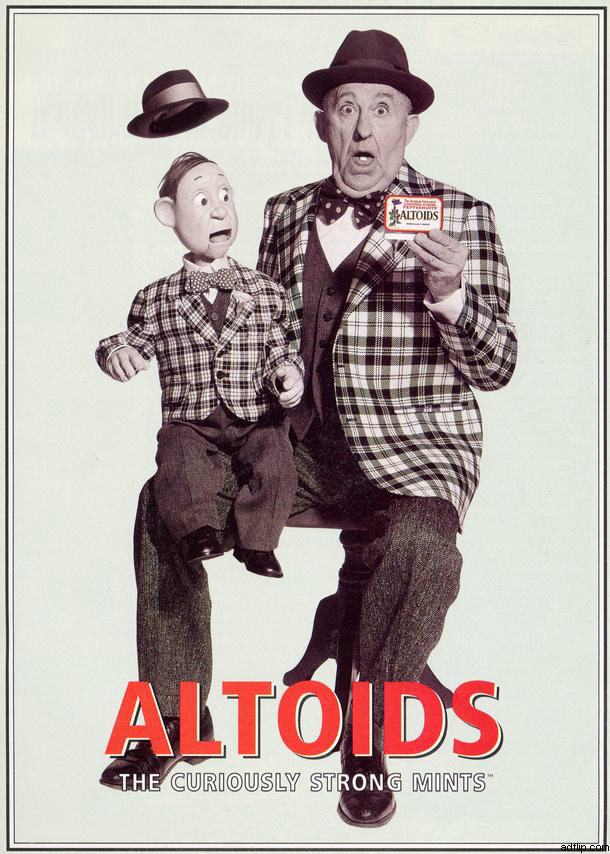 Our audience of local influencers is a marketer’s dream: educated, engaged, conscious and affluent city dwellers.
Over the last 15 years, we’ve worked with national brands in just about every category: spirits, television, finance, automotive, telecom, you name it, to help establish authentic local relationships with their target consumers.
Altoids is a great example. In the 1990’s, Leo Burnett’s creative team of Steffan Postaer and Mark Faulkner brilliantly seized upon the quirky British phrase “Curiously Strong Mints” and built an edgy, graphic campaign around it. Initially they used two mediums: outdoor, where the poster-like quality could reign magnificently, and alt weeklies, where the trendsetting audiences would shoot product trial and word-of-mouth out of a rocket. Within the decade, Altoids was a billion-dollar brand, and we’d worked closely with its media team all the way to the top.
Got any brands looking to make magic happen? Let us see how The Alts can help with a launch or a “freshening up.” Our capabilities include print, digital and in-market event execution.

In addition to Brian’s efforts, AWN sales representatives across the country are pitching The Alts to a wide variety of national advertisers in a variety of categories. The list includes our standard brand categories (wireless, alcohol, and tobacco) as well as additional categories that can also find a valuable audience within our industry (such as automotive, restaurant chains, political campaigns, and publishing houses).

Also we recently created a more up-to-date, customizable AWN sales deck for sellers within our network to take to market.    If you’d like a copy or are just curious, let us know and we’ll send a copy via email.

As you know, AWN needs active participation from sellers in order to continue to pursue advertising opportunities for the network.   We are spreading the word, and we would love to hear what you have been doing to keep this ball rollin’.   Please copy us on your e-blasts, send us your current AWN claims list, and/or give us a call and tell us how we can help you. We look forward to hearing from you.

Just out, a new report about the future of the newspaper industry from WhoNeedsNewspapers.org covers 50 publications in 50 States.   Willamette Week is the sole alt weekly newspaper featured in the report, representing Oregon in the mostly daily newspaper roundup.

The industry report doesn’t provide a clear, single message as to what that future might be, but they conclude after gathering a number of interviews with newspaper editors, publishers and digital managers that “print is not dead.”

The story was first reported on NetNewsCheck, where you’ll find an overview of the findings presented on Monday before the Society of Professional Journalists/Radio Television Digital News Association conference in New Orleans.   The verdict may still be out, but after reading the report and viewing the video interviews with a number of successful publishers and editors, you can’t help but feel the buzz.

Willamette Week’s inclusion in this study was more than token move by the group.  The well-edited, arts & entertainment weekly alternative has been winning awards for their investigative coverage for many years (including a 2005 Pulitzer Prize for “The 30-Year Secret”).    Co-owners, Richard Meeker (publisher) and Mark Zusman (editor) have been connecting with readers and promoting arts & entertainment in the Portland market since 1984, both are interviewed and provide comments about their successful publishing and editorial strategies.

Willamette Week has been a member of The Alternative Weekly Network since 1994.

When you hear a new phrase repeated over-and-over, it usually means there’s a fair amount of warm wind behind it and often it’s nothing more than a catchphrase.   The buzz-worthy  “hyper-local” seems to fit that description well.

In the media business, “hyper-localism” is really nothing new.   Anyone who’s ever read a local newspaper to find out who has recently croaked, been busted, or why your favorite local eatery has served their last meal knows what hyper-localism is.

I started my short-lived newspaper career reporting Little League games in the  Novato Advance, a weekly with less than 5,000 circulation.   It wasn’t until many years later when I sat across the table negotiating ad rates with Gannett big shots that I realized how valuable my local experience in Novato had been.

Judy Muller, a USC journalism professor writes today in the L.A. Times about the importance of local weeklies and the current state of the newspaper industry.

I found it refreshing to hear Ms. Muller’s inspired thoughts about small-town publishing in the face of such depressing print publishing news that is served up hourly on every media front.    She points out in her Op-Ed, these journalists often must be sporting some kahunas to be writing about folks so close-to-home.   I agree, that’s probably another reason I abandoned a journalism career early- after a number of editorial reprimands.

Don Rowlett, the one-time CEO, President of Ross Stores, sat in front of his management team in the early 1980’s exhorting the value of local media, and community newspapers in particular.   He didn’t use the phrase “hyper-local” but everything else that was said in connection to that notion was not unlike the mantra we’re hearing from so many media (and advertising) professionals today.   His parting words sounded something along these lines, “it has always been about local community and will always be so, regardless of what technological developments occur for individuals.”

There is something to be said about delivering the kind of news that national media outlets can’t be bothered with.  Why else would Patch and so many local independent online journalists be jumping into the local media biz?  It may sound corny (just like most of the local edit) but when it really comes down to it in the end, that’s what people really care about.

Now, what does this mean to those in the alternative news business?  Publishers, editors, online product developers?   Have you thought about your local audience lately?  Where are they headed?  How can you remain a part of their lives?