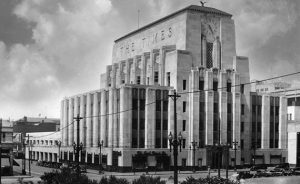 Steve Lopez as been in the newspaper business for 43 years. And his piece in Sunday’s LA Times about the state of his newspaper may be one of his best. In it, he describes the state of the printed form of the fourth estate, the LA Times in particular, and his feelings on the subject. He also shows a little hope that the paper’s new owner, Dr. Patrick Soon-Shiong will help right the ship and make the paper vital again.

The new owner is obviously a very smart guy, having been a talented surgeon, inventor and now philanthropist. But whether he can reverse a trend that is not only nagging an industry but also leading to a malaise of societal ignorance is the question.  He seems to think so, investing $500 million into the purchase.  And he also is working on making employees believers, with a Friday visit to the downtown offices of the Times to speak to his soon to be new employees.  But not everything he’s done has turned to gold.  That’s what risk taking is all about.

BTW – the Times will be vacating their home of over 80 years when they move out of their 1935 Art Deco digs and move to El Segundo.  The Omni Group purchased the properties in 2016 for at least $105 million and will convert them to upscale housing.

Part of what makes news interesting is the telling of the story. And nobody does it better than Lopez. At least for the time being. Read his piece here.