This is a time of year that we usually share a recap of the past 12 months of ad sales or review any new developments during the same period. Since we have already been keeping many of you up-to-date throughout the year on this blog site or through our Facebook pages or elsewhere, we’ll keep the recap short and also try to fill-in just a few spaces.

NEWS or DEVELOPMENTS not yet shared:
APRIL ~ HanzMedia digital development contracts begin with ACG Media in Torrance, California.
AUGUST ~ HanzMedia contracts with The Media Audit for the first time on behalf of AWN; new additions to the reporting base include web advertising research and a new digital interface.
NOVEMBER ~ AWN sales results this year were much healthier than expected. New advertisers join the list, replacing a number of larger advertisers who were nearly absent in 2010.
NOVEMBER ~ We’ve collected 2011 ad rates from publications, continue to collect ad calendars, events and promotional items for the new year.

DECEMBER ~ Look for a complete recap of 2010 advertising sales next month. HanzMedia’s annual holiday card and video is posted (elsewhere on this site). Happy Holidays and a very Merry New Year!

We’re now beginning to look back on the first year that digital advertising in the U.S. became the number one advertising source for newspapers (local and national).   Online ad spending is expected to reach $25.8 billion by year end while print ads measure $22.8 billion.   According to eMarketer, “Online ads are typically seen as more reliable… their effectiveness can be measured, whereas print ads are difficult to measure.”  That’s always been a true statement since web advertising arrived on the scene in the 90’s, but it’s been difficult to measure out a winning formula for newspapers when print was so dominant.  Not so any longer.

This blog entry seems timely on the heels of our last entry where we cited NAA’s reports of newspaper revenue declines, a story in which the NAA heralded economic recovery for newspapers based on this multi-platform growth.  While I’m still trying hard to subscribe to the glass-half-full thinking, it’s hard not to recognize this as another cold gust to the face in the bleak mid-Winter.

Many of us knew this day would eventually arrive and newspapers would not only be faced with a different revenue model outlook for the future but at the same time a notable change in journalism itself.  For advertisers, and retail in particular this portends a very different future for longer-term planning and strategies to reach new and existing customers under a rapidly changing sales and marketing environment.   This will be a beacon call for more revised print advertising budgets and plans that require digital integration, especially for more traditional print advertising war-horses who have yet to make the major commitment to digital.

Happy Holidays to all of our friends and associates. 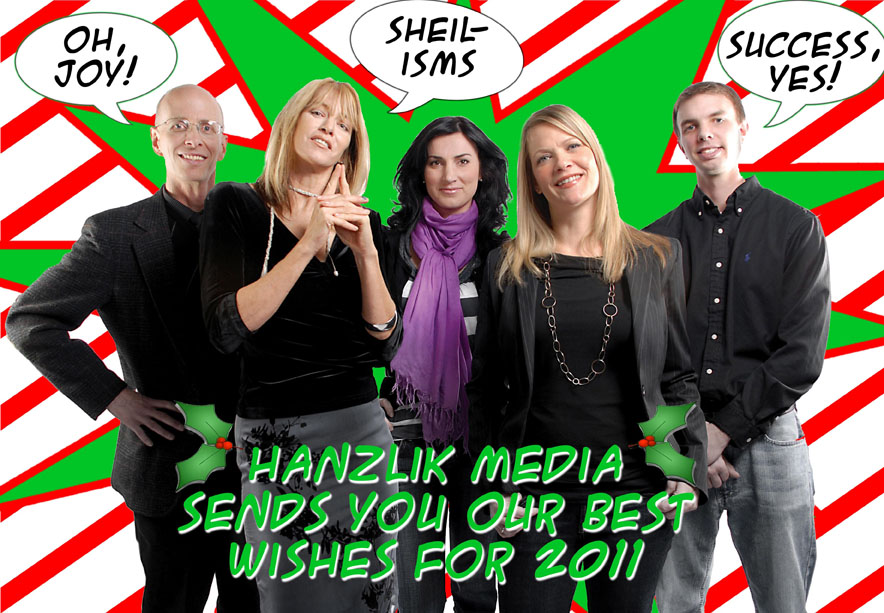 It’s that time of year again and the HanzMedia crew are up to their old tricks. We’re featuring Sheila Malone, who’s been crunching numbers forever. She’s almost famous for reinventing phrases in the English language, so here’s our present to you from each of us.  Inspired by Colorado Springs Indy’s John Weiss-isms.

Thanks to the Sacramento News & Review for providing the comfortable and attractive accommodations which we enjoy daily, and to their Art Director David Jayne for the professional photo session.

I’m never sure how to take the numbers from the Newspaper Association of America (NAA). By way of News & Tech last week, we discover the NAA reported newspapers sold more than $6 billion in print and online advertising during Q3, a 5.3 percent drop from the year prior. According to NAA, the decline in advertising continues to slow, continuing a somewhat unremarkable trend that began earlier in the year.  Maybe it’s because the year (2009) was worse than any previous year since they began keeping track of such things.

Realistically, it’s the 17th consecutive three-month period in which advertising revenues declined.  Even with the inclusion of online advertising which has been growing, how, really is that good news?

The NAA points to the economic recovery in the U.S. and newspapers’ multi-platform earnings in which they’re heralding healthy online revenue growth.  True, this year has seen some bright spots, and there’s definitely some skid marks beginning to indicate a decline in the free-fall numbers from the previous year.

I’m not the kind of guy who often views the glass half-empty but I know that there’s a number of ways you can interpret numbers over the short run and long haul.  I’m for viewing the big picture which in my opinion does not yield much of a healthy story for newspapers.

View the numbers at the NAA web site both quarterly and annual reports, make your own story.