“We are returning to where it all began,” explained Executive Director Mark Hanzlik. “As a national collective of alternative weeklies, AWN actually began at the Sacramento News & Review.” After a few years of rapid growth hidden among the sales cubicles at the News & Review, the Alternative Weekly Network (AWN) struck out on its own in 1997. Now after nearly fourteen years apart, the two organizations are sharing quarters again.

Hanzlik is excited to move his staff into their new green home this week. The News & Review just recently completed renovating an old market in a redevelopment area as their new office, incorporating features such as blue jean insulation, skylights, dual flush toilets and a shower to encourage cyclists.

“I haven’t tried the waterless urinal yet,” joked Mark, “but our staff embraces the concept of living and working in a more sustainable manner.” 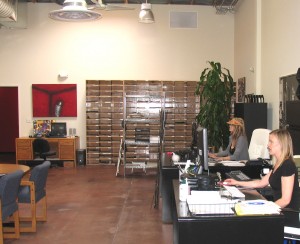 Sheila and Sarah settle in to their new digs

AWN was an outgrowth of an earlier assemblage of California alternative weeklies formed as an advertising collective nearly twenty years ago. News & Review CEO Jeff von Kaenel and other like-minded individuals shared the vision of a freewheeling collective of independent publishers pooling their resources to sell national advertising as a group.

Jeff remembers, “What we felt then was that companies that had multi-market problems were looking for multi market solutions. AWN could offer creative and cost-effective solutions. Now with the large dailies in our markets struggling, it makes the value and opportunities of cooperative selling through AWN even greater.”

“Today, that vision lives on,” added Hanzlik. “We’re still successful, and a lot smarter and more efficient than we were in the 90’s.”

Hanzlik says in addition to the physical move, the company is currently retooling the AWN website, and upgrading some of the operational processes of the cooperative.

“In the national arena, we are growing our digital advertising capabilities rapidly,” Hanzlik concluded, “but we believe print remains the foundation of the media mix for alternative weeklies.”