The future of journalism & newspapers? 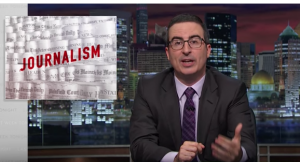 Editor and Publisher has published their annual feature of 25 men and women under 35 years of age in their April issue.

Two staff members from The Santa Barbara Independent are included in the group.   News editor, Tyler Haden and Chief Financial Officer, Brandi Rivera.   Those two and others in the article were asked to pass along advice to other young professionals in the field about how to keep the journalism alive and relevant to their generation.

The Santa Barbara Independent has not only been the largest publication in Santa Barbara County in total readership for numerous decades, they’re also an award-winning alternative weekly has been the dominant editorial product in terms of news, arts and entertainment coverage.

Assessing our performance as a network over the previous year is not something we do as often these days. Some might think it’s because our industry is in decline and there’s little to get excited about but I think it’s simply because we can no longer see our future based on what we’ve done in the past.

Either way, backward glances can be slogs through a history of unimportant facts and details, so I’ll try to reflect in a somewhat concise manner.

The number of publications in our print network remains about the same every year (153 titles), but revenue continues to pale in comparison not only to our high water mark in 1999 but to every recorded year since the inception of the network.

Certainly, outside forces changing the nature of publishing a print product in our day and age account for most of the decline but Alt Weeklies particularly in larger markets have also suffered from limited resources and revenue decline in the traditional ad combo of sin business (liquor, tobacco, sex) and classified ads.

A bit more difficult to assess are some of the changes within the industry itself —positive and negative.   Many publications have been able to reinvent themselves and maintain a sense of stability and viability within their own communities.   This hunkering-down has been somewhat at the expense of the industry and/or group effort that would help bolster growth and stability.   Of course we notice the change at AWN.  Each year, we function less as a cooperative sales network with members investing and developing revenue together and more as a clearinghouse for non-local advertising arriving often in one-off fashion.

With most of the healthy success coming from mid-size and small publications, larger urban markets continue to struggle to survive in the new media universe where print market shares shrink more dramatically.

Two AWN charter members ceased publishing in 2015. Philadelphia City Paper and Albany Metroland were not only award-winning and robust editorial products in their respective markets but also important AWN members.   Philadelphia is the 4th largest market in the country and Albany is New York’s capital city, both made the grade quite often.

The flipside of these departures is the addition of a half-dozen new titles in our database. New publications added to our list doesn’t automatically equal new revenue but the opportunity for business and extension of our reach doesn’t hurt.

This year we are celebrating 20 years of AWN as a legal entity. In March 1996, more than a dozen Alt Weekly leaders gathered in Sacramento to form the incorporating board of directors for soon-to-be-launched non-profit advertising cooperative.

Poynter is taking stock of the alt-weeklies again and with the recent sale of The Village Voice, declared the altmedia industry is sliding at a particular angle that seems to be measured only by the performance of its largest markets.

It’s hard to deny the decline across-the-board in revenue, staffing, printed pages, and readership.   That’s apparent with nearly all print products in some form or another these days.   Certainly the daily newspaper industry has taken a larger hit, as have some magazines and classified-shopper publication with aging reader base and advertisers becoming more difficult to count on.   For Altmedia though it has been a mixed bag with property sales of many larger publications taking most of the negative spotlight.   The larger altmedia properties were dealing with declining economies of scale as their ad base contracted.  Many smaller publications already operated with less resources.   As they say, the bigger you are the harder the fall.

While there were a lot of publications changing hands in 2015, Philadelphia City Paper was the only casualty, publishing its’ final issue a week ago.   Philly Weekly and City Paper competed for Philadelphia readers for more than 20 years in one of the closest contests within the Altmedia industry.

After the closure of Philly City Paper,  five AltMedia major markets with two competing weeklies remain publishing in the U.S.

In Portland, Willamette Week and Portland Mercury are as different as The Seattle Weekly and The Stranger are in Seattle.

Also in the West, Las Vegas where there have been as many as five alternative publications publishing at once, Las Vegas Weekly nearly stands alone with Vegas Seven still breathing, though neither is alternative by yesterday’s standards.

Finally, Chicago still supports two venerable weeklies in their own right, The Reader and smaller yet still feisty Newcity.

Altmedia properties in mid-size and smaller markets have faired much better and particularly those bolstered by a strong college base or State Capital.   There’s plenty of good news and life left in AltMedia across the country.  The health of this industry can’t be measured in the closure of one weekly in over-crowded two paper markets or with the sale of publishing properties previously owned by Village Voice Media.

It seems every year at least one alt media publication makes an appearance on the Editor & Publisher newspaper list of those who Do It Right.   The list is comprised mostly with daily newspapers though magazines, niche publications such as alt media have made the cut on the list previously.    The top 10 are newspapers who have experimented in ways that make positive changes in a struggling industry or they simply are inspirational in their effort to remain relevant.

In 2015, C-Ville Weekly received honorable mention for their innovations in 2014 which included a large bound edition of Best of C-Ville and an annual guide to Charlottesville.   Read more about the newspapers honored in March issue of Editor & Publisher.