Whew!  Those political commercials are finally over! Who knew we’d be so happy to see used cars and that little pill for when an ordinary moment becomes extraordinary?

As we all know, political advertising reaches a fever pitch in the weeks prior to an election, and this mid-term officially took the cake, and a chunk of money too.  Ads for major party candidates dominated television networks and radio stations, and our mailboxes were pregnant with multiple direct-mail pieces for the same candidates and issues.  ? ?But did alt weeklies get any of that cake?

We had several conversations in the past few months about how newspapers (mostly alternative weeklies) made the perfect advertising vehicle for political advertising, and if not in print, at the very least on alt weekly web sites.  So,  since we’re always curious, we asked a cross-section of Alt weekly publications if they ran any political advertising this election season?

Here are the results from about a dozen respondents:

Did you run any political display ads in your paper?

On your web site?

50% of the pubs that received print ads did run any online ads.

Only 1 pub received online and no display.

If so, for whom/what? (candidates, propositions, both) 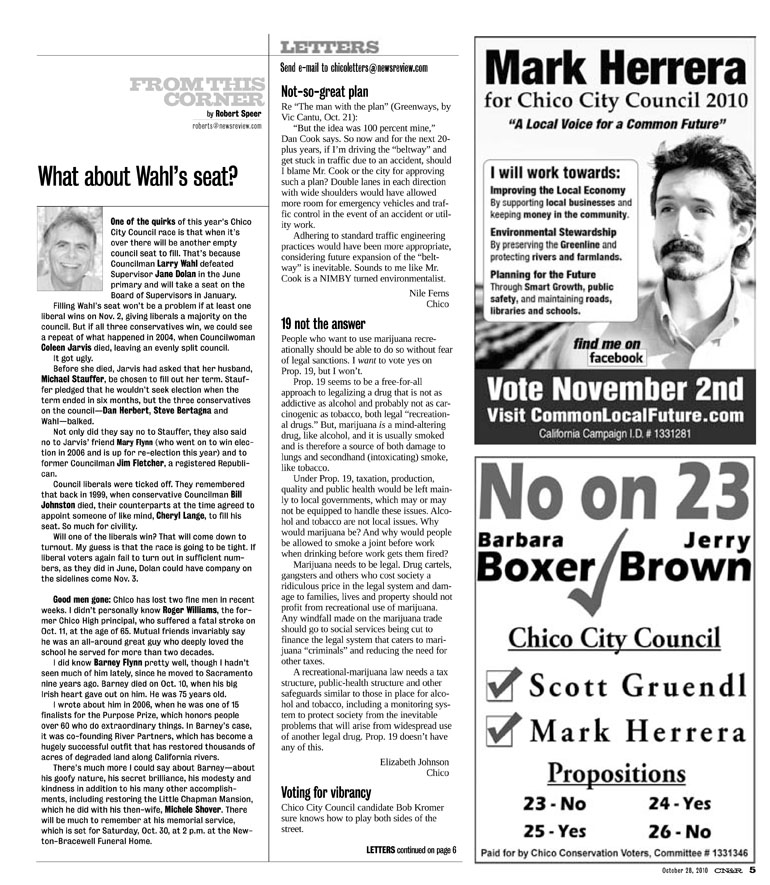 Most respondents said they received ads from both. Here’s a few responses.

Alex Binyon, Chico News & Review– 2 City Council campaigns (Liberal), 3 separate school board campaigns from 2 liberals and the conservatives running together as a slate. One campaign from a local liberal PAC – No on 23 and City Council endorsements

What objections have you faced?

Jane Smith-McClaskey, Willamette Week – Readers are more educated than most and have already made up their minds. Budgets spent on TV/radio/direct mail – The usual in our market, not a ton of money is spent on newspaper ads in general.

David Comden, Ventura County Reporter – Locals buy ads – the senate and congressional incumbents do not – they only do TV and direct mail (as they can sort mail by voter registration and propensity to vote (can you believe that?)

Sean Hitchcock, Hartford Advocate – TV was the only place to be. Our edit was too “Polarizing” for election season (stunning).

Was it a concerted effort made by you, your sales team, or designated sales representatives?

John Murphy, Reno News & Review– All of the above.  Major effort in primary, with follow-up for general election.  Met with candidates & their reps/ad agencies (or by phone/e-mail if out of market). Got sidetracked with our “Best of” issue, but resumed contact within the last week.

Faben Alula, East Bay Express – I put a lot of effort in digging for contacts, consistently following up, and providing a variety of options.  My publisher made me the designated sales rep for all political ads, and trained me on the protocol. We stayed in communication throughout this segment.

Jane Smith-McClaskey, Willamette Week – Our publisher and sales team. The publisher push helped get money from the race for governor. I put mainly 2 reps on it, so we knew everything was covered. Talked with news staff to find which measures and candidates had $$ and needed a push, so put focus there.

Various comments:
~We had one rep give it quite a bit of effort, but all were brought up to speed. Quite a bit on a few candidates who showed initial interest.
~Big effort by one rep with two weeks left to no avail…too little too late.

Did you create a political sales package? (if so, what was it?)

No!  – this was the general consensus. Most publications offered non-profit rates.

Does your paper publish election endorsements?

All the no’s received no election ads, only one yes publication does not do endorsements.

If you have received election ads in print or online, what advice do you have for the publications that can’t seem to break that category?

Deborah Ellis, Buffalo Artvoice –  Editorially, we cover the politico’s in great depth so our readers are already in tune.  I think the candidates see that and know they are reaching out to an educated, involved reader who potentially influence other voters.

John Murphy, Reno News & Review – Use research, e.g., Media Audit, to establish value of readership (people who voted, political affiliations, demographics, etc.) and be diligent about pursuing with the people who can make decisions.  Capitalize on Independents in your readership who are almost always the target audience as the election date gets closer (when it’s an already close race).

David Comden, Ventura County Reporter – Call and tell them that our readers VOTE and their message lasts a whole week…or more!

Faben Alula, East Bay Express – Endorsements and political coverage in general definitely help, political campaigns then see the value in your paper…Also aside from just prospecting campaigns directly, very good to prospect organizations that endorse a certain candidate/ballot measure.  These organizations usually have money to take ads out for the candidates they support.

Alec Binyon, Chico News & Review – It helps to have the sales leadership involved in the community enough to have prior relationships with these people. I was on cell phone terms with a couple of these people through other involvement in the community so that helped a lot. I imagine this is much easier to do in a small market like ours, but our involvement clearly helps those people perceive our paper as important and necessary. Serve on boards; learn the ins and outs of your city’s political environment. A newspaper person belongs in the fray. And not many, if any of your competitors will be there with you. I made calls on the state level but got nothing. The only props mentioned were from a local PAC’s buy. This seems like a good starting point though. Who are your local Political Action Committees? I’d love to hear how people are getting PROP money away from broadcast if anybody is. I haven’t seen any PROP ads in the daily either.

So, there it is… Engage in diligent research, use those research numbers, and get an early start!   The 2012 election season has already started (only mildly kidding), so it would be wise to keep the next election cycle on your radar.

For those of you who responded, thank you.   Any others, how did it go for you?  We want to know! And please keep us posted as you work on election campaigns in the future!