Just out, a new report about the future of the newspaper industry from WhoNeedsNewspapers.org covers 50 publications in 50 States.   Willamette Week is the sole alt weekly newspaper featured in the report, representing Oregon in the mostly daily newspaper roundup.

The industry report doesn’t provide a clear, single message as to what that future might be, but they conclude after gathering a number of interviews with newspaper editors, publishers and digital managers that “print is not dead.”

The story was first reported on NetNewsCheck, where you’ll find an overview of the findings presented on Monday before the Society of Professional Journalists/Radio Television Digital News Association conference in New Orleans.   The verdict may still be out, but after reading the report and viewing the video interviews with a number of successful publishers and editors, you can’t help but feel the buzz.

Willamette Week’s inclusion in this study was more than token move by the group.  The well-edited, arts & entertainment weekly alternative has been winning awards for their investigative coverage for many years (including a 2005 Pulitzer Prize for “The 30-Year Secret”).    Co-owners, Richard Meeker (publisher) and Mark Zusman (editor) have been connecting with readers and promoting arts & entertainment in the Portland market since 1984, both are interviewed and provide comments about their successful publishing and editorial strategies.

Willamette Week has been a member of The Alternative Weekly Network since 1994.

In a day when print, as a medium, is relegated to the ranks of 8 tracks and VHS tapes, it is more than a little encouraging to hear some good news on the print side of the alternative weekly industry. It turns out alternative weekly print products are not obsolete. In fact, they are very much a part of our communities. Readers continue to depend on alt weeklies, and follow the scent of these well-written, locally-focused publications.

Here’s a success story from Spokane, Washington.    The Pacific Northwest Inlander has reached new heights in market penetration.  According to the latest report from The Media Audit, the weekly publication has outpaced not only every section of the daily newspaper, but all other locally-produced media in the marketplace.

“Well, we finally scaled the mountain here – or at least the mountain as I’ve perceived it all these years,” reported Jer McGregor, General Manager of the Pacific NW Inlander

“Last year, in an effort to gain market share while our daily pulled back circulation and laid off staff,  we decided to increase the number of distribution locations and total print run,” continued McGregor.   “So, not only have we surpassed every section of the daily newspaper*, but we’ve also surpassed (for the first-time ever) all other media, all local television newscasts.”

*The Inlander has not yet surpassed the combined Sunday edition of the daily newspaper in the market, The Spokesman-Review but McGregor indicates they are close.   Check out The Media Audit ranker report for the Spokane market and see their killer numbers for yourself. 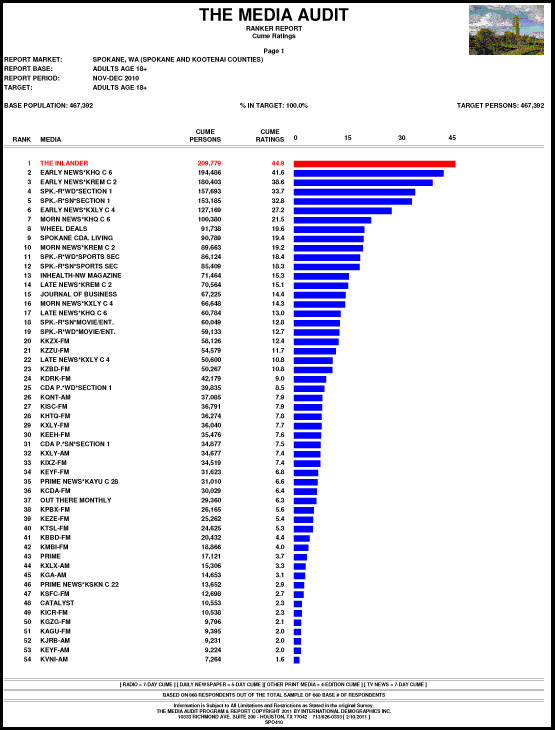 Another media appearing on the ranker (at #13)  is the local InHealthNW Magazine, also published by the Inlander and distributed separately in the marketplace.

Our company’s belief, similar to what can be found in the “Power of Print” campaign, is that success is in the product you deliver, not always how it is delivered.  Our goal is to be the best at delivering “local” to our community, and being closely involved with as many local organizations as possible.

The free distribution method of alternative weeklies, unlike other traditional media, has not been interrupted.  Television is now dealing with a wide range of competition from video games, cell phones, on-demand video and most of all DVR’s that allow users to skip commercials.  Radio now competes with satellite broadcasts, iPods and the deregulation that’s lead to more big-format competition within its own ranks.  Daily newspapers contend with their long-standing pay-for-service format that no longer appeals to as many users.  Weekly newspapers are still available in communities as a desired free product providing important local news and entertainment coverage that so many people are interested in.

There’s been readership evidence to support our ongoing claims alternative weekly readers are young, affluent, and educated, but we also have proof in this market and probably a few others that an alt weekly publication will reach more than any other local media. And that’s good news.